Universal child welfare schemes mark the agenda – globally, in Europe and in Spain

Target 1.3. (Sustainable Development Goal 1) on social protection is gaining traction. This post resumes some of the most recent events and publications of the global social policy debate.

The Agenda 2030 and their Sustainable Development Goals include setting-up systems of minimum income guarantees to abolish child poverty. Amongst the most prominent goals of the 17 is the first on poverty. It entails the much discussed target 1.3 which reads:

Implement nationally appropriate social protection systems and measures for all, including floors, and by 2030 achieve substantial coverage of the poor and the vulnerable.

Globally, a high level event was organized to discuss the tool of Universal Child Grants as a key measure for social inclusion of children. In the wake of the conference, the two multilateral agencies in charge of labour – ILO – and Children – UNICEF – have jointly published a landmark report which relates the state of coverage of children with welfare schemes worldwide. It calls for progressively expanding universal child grants. Likewise, a recent conference hosted by the OECD, the EC and the Finish Government brought together practitioners and analysts from all over the world to discuss best practices of extending social welfare schemes. In the meantime at the United Nations, a report has been published by the Social and Economic Council that reflects on the relation between inequality, fiscal and social protection. 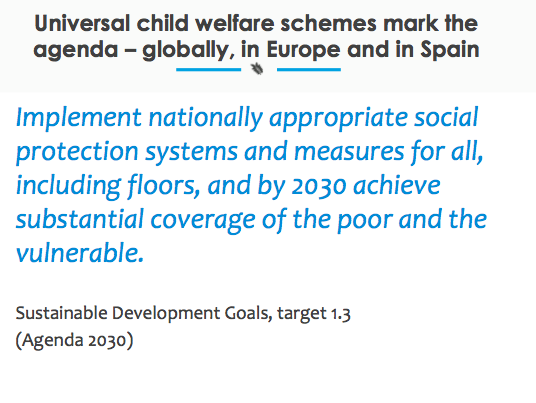 At European level, the Fundamental Rights Agency has recently denounced the increasing rate of child poverty and children left behind in intergenerational poverty traps. Principle 11 of the European Pillar of Social rights is yet to unfold its obligations to national governments. Since 2015, the European Parliament has called for a Child Guarantee, which would establish certain minimum living conditions for all children. A EP study reiterates the need to use EU funds more strategically to fight child poverty. Civil organizations call upon the EU to take on the protection of children against poverty and deprivation amongst their competences and put money on the table. Only now, this has been taken up by the Commission by a feasibility study.

In Spain, the recently instated figure, the High Commissioner for the Fight against Child Poverty, has given policy attention to the scandal of child poverty in Spain. According to the annual EU exam (page 44), the Spanish child protection policy is both poorly equipped in size and inefficient in reaching out to the most needy. This had been confirmed by a study that monitors the Spanish performance on the 2012 EU guideline for “Investing in Children”.

As we can see, there's a big push towards the design and set up of efficient social protection mechanisms for children worldwide. And what is most interesting is that this process is leading to a truly global agenda with a global and shared framework (either the SGD or the EPSR). A strong political will to transform the welfare state, technical proposals that adapt better to the new realities and a carefully generated social consensus are the ingredients that could bring together real advances on this subject. At long last.

Do you want to search by topic?